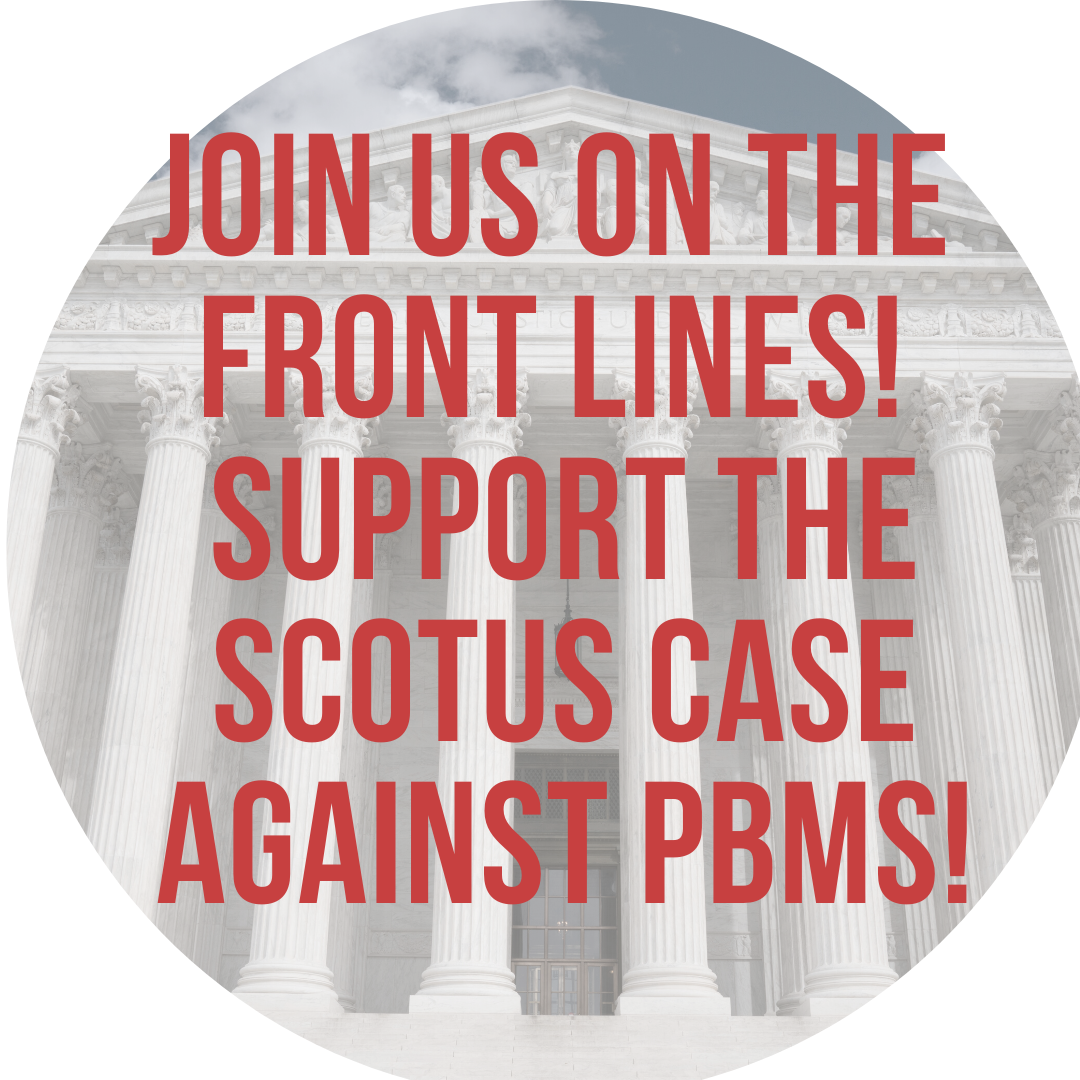 Stand with us on the battle line! Support the SCOTUS Case against PBMs!

Background on the case: State laws reining in PBMs often hit a speedbump: PBMs simply ignore them. How? The PBMs claim that federal law (ERISA, the Employee Retirement Income Security Act) preempts state law. In 2015, Arkansas passed a bill regulating MAC lists — requiring PBMs to reimburse pharmacies at a price equal to or higher than the pharmacy acquisition cost. The PBMs ignored it, and even got a summary judgement in district court prohibiting the law’s enforcement because of ERISA.

But the State of Arkansas fought back; it challenged the PBMs’ position in federal court. (The case is Rutledge v. Pharmaceutical Care Management Association.) The state lost. The 8th Circuit Court found in favor of PCMA, and PBMs were emboldened to continue to ignore state laws — they could expand DIR fees and enact other outlandish practices.

In a nutshell, that’s why PBMs’ horrendous practices haven’t changed much.

But Arkansas wasn’t done. It appealed the 8th Circuit Court’s ruling to the U.S. Supreme Court. On January 10, the Supreme Court agreed to hear the case. That means it could overturn the 8th Circuit Court’s decision.
Bottom line, a ruling in favor of Arkansas would mean that PBMs can no longer claim an ERISA preemption against State laws that attempt to regulate some of their behaviors.

Your VPhA Board is acting to FINANCIALLY Support Arkansas Pharmacists Association in Upcoming Supreme Court Case.

Our colleagues at the Arkansas Pharmacists Association have asked for help from state pharmacy associations across the country to offset some of the massive legal costs that this appeal is going to generate including the drafting of the amicus brief in support of Arkansas’ position. We’re talking hundreds of thousands of dollars in costs that if decided in our favor, will benefit pharmacy in every state.

So, here’s the ask: VPhA will match dollar for dollar, up to the first $2,500 received from VPhA members. Any amount of contribution is appreciated. And, if we raise more than our $5,000 goal, anything above the goal will go to the Arkansas Pharmacists Association as well.

Helping is easy. Just click here to a make a contribution to the Arkansas Pharmacists Association to help it fight the PBMs! [No log in is necessary. Just click through the pop-up box.]

The SCOTUS review is not only huge news, it dovetails what’s happening in Virginia with HB1290 and SB251. A positive ruling by SCOTUS in the Arkansas case will help us here in Virginia too. We all know the vital importance of this Supreme Court case. Pharmacy must stand together as one against the PBMs!